Posted on June 16, 2015 Categories: Interred Comments are off for this post 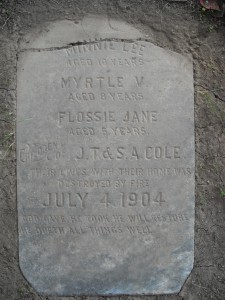 was a spinner at Caraleigh Mills. He and his wife, S. A. Cole and their four children, son Gowan, 14, daughters, Flossie Jane,5; Myrtle, 8; and Minnie Lee, 10 attended the 4th of July fire works at Cameron’s Field on Monday and returned to their home in Caraleigh Mill Village after 11 PM. The family retired shortly before midnight.   The parents’ bedroom was downstairs and the children’s bedroom was upstairs immediately above the parents’ bedroom.  Upon retiring, J. T. Cole, removed his trousers and hung them on a chair in the bedroom.  The trousers had 54 dollars and change in a pocket..

Sometime is the early morning hours, the parents were awakened by flames.  J. T. Cole, got up rushed to the chair to pull on his trousers, but they were gone.  The parents realized the hall was ablaze and they could not go up the stairs to their children’s bedroom.  They rushed to the front door, which was standing open, and out into the yard.    On the way out they saw Mr. Cole’s trousers lying in the hall near the door.   Once outside they looked up and saw their children immediately above them, standing at their bedroom windows.  Son, Gowan, leaped out the upstairs window.  He was injured by the fall and terribly burned.  The other three children were overcome by smoke and/or fire before they could attempt to leap from the window.

The three precious girls were buried in one coffin in Raleigh’s City Cemetery.  Their tombstone has the legend: “God Gave, He Took. He Will Restore. He Doeth All Things Well.”   The family was left “poor and destitute.”  The Caraleigh Mill was closed down for a week. People in Raleigh were asked to donate to the family.  A fund was set up at the Raleigh Savings Bank.  It is possible that the fire was an attempt to cover a burglary.  Mr. Cole’s trousers having been removed from his bedroom and thrown down in the hall, pockets empty.