Since RCCP was founded in 2006, we have raised money for projects that include the restoration of grave markers, fences, and stone walls, and installation of plaques to introduce historical information for City Cemetery, O’Rorke-Catholic Cemetery and Mt. Hope Cemetery. Restoration and conservation methods used are according to US Secretary of Interior Preservation methods.

Our current projects include:

Our largest and most extensive project was the restoration of the William Peace family plot, completed in June 2017. RCCP raised the funds required for this project over a nine-year period. The plot, with its stone walls and ornate cast iron fence and five family graves, is considered by many to be the centerpiece of City Cemetery. We completed the work in phases.

William and his brother Joseph operated a store, J & W Peace, on Fayetteville Street. The brothers were large landowners in Wake and Granville counties and active in civic affairs. A religious man, Peace was one of the original four ruling elders of the First Presbyterian Church. In 1857, he donated $10,000 and 8 acres of land to establish a Presbyterian school for women—Peace College.

The first work phase involved repairing the massive stone walls – some sections weighing more than a ton. When completed, we began the restoration of the historic monuments for William Peace (1773-1865), his brother Joseph (1766-1842), and Joseph’s family, his daughter Ann Peace Young (1794-1822) and her six-year-old son Joseph William Young (1816-1822) and his granddaughter, Ann Augusta Young Holden (1819-1852), the first wife of Gov. William Holden.

Special thanks for donations from the Sloan Foundation, William Peace University, the City of Raleigh, the 1789 Questers, Raleigh Rotary, our members, and many others. Shown below, before, left, (2009) and after (2017).

All restoration work was done by Dean Ruedrich. 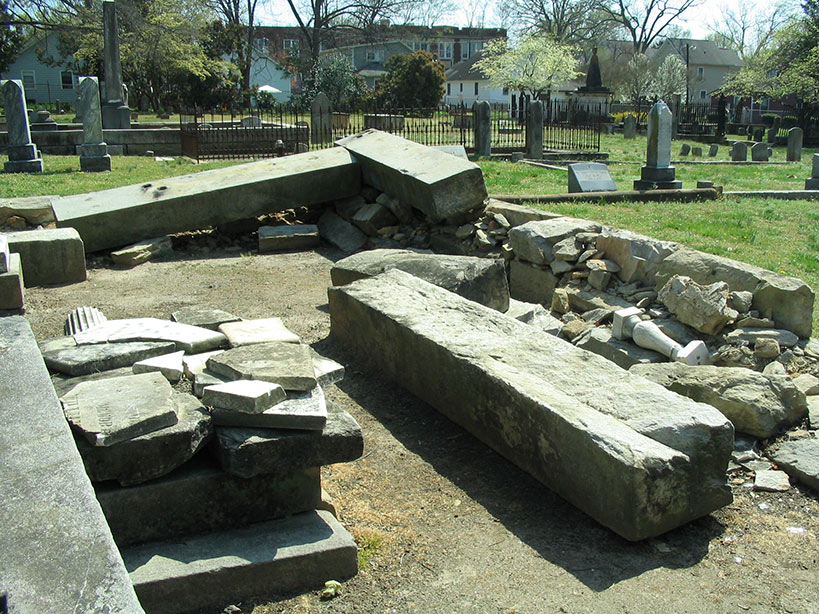 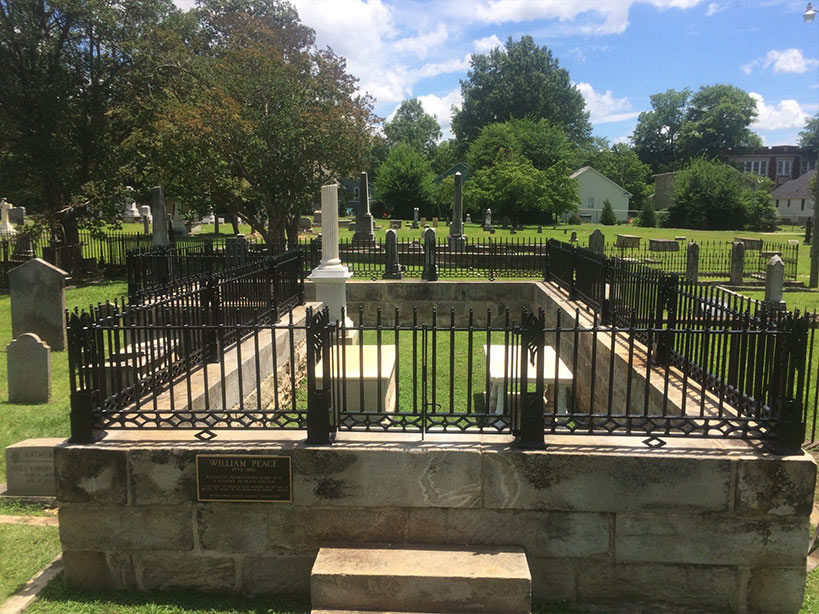 In 2016, the family plot of Revolutionary War Hero Col. William Polk was restored, thanks to a generous donation from the North Carolina Society of the Cincinnati. Funding covered restoration of eight grave markers. In the past, the Col. Polk DAR chapter funded cleaning of the monument.

The overview of the Polk family plot shows a much-improved landscape (below). The monuments have been repaired, cleaned and repositioned to their proper places. All work done by restoration specialist Dean Ruedrich.

Born in Mecklenburg County, Polk attended the Mecklenburg Convention proceedings on May 20, 1775. At age 18, he was a major in a North Carolina regiment of the Continental Line, serving under Gen. George Washington at Brandywine, Germantown and Valley Forge. Ordered South, Polk was there at the Battle of Camden and with Major General Nathanael Greene at Guilford Courthouse near Greensboro, NC. At the hard-fought battle of Eutaw Springs, his horse was killed under him, and he was severely wounded. Polk was a legislator, president of the State Bank, trustee of the University of North Carolina, and a mason (Grandmaster of the Grand Lodge of NC). He was a cousin of President James K. Polk and father of General Leonidas Polk, the Bishop-General. At his death, he was the last surviving field officer of the North Carolina Continental Line.

The original portion of Col. Polk’s obelisk has an inscribed marble panel, and it has been damaged, likely by cleaning with a household bleach product. This is the text of the inscription:

In memory of William Polk, born in the county of Mecklenburg, July 9, 1758; departed this life January 14, 1831, aged 75 years, 6 months and 5 days. A gallant soldier throughout the war by which the independence of his country was established. A pure and ardent patriot, inflexible in integrity, firm in friendship, true and warm in every social affection. He possessed while living the respect and attachment of all who knew him, and left an affectionate veneration for his character deeply impressed in the hearts of his widow and his children, who have caused this monument to be erected.

RCCP is currently working on fundraising for the repair and replacement of the perimeter iron fence for the Polk plot. 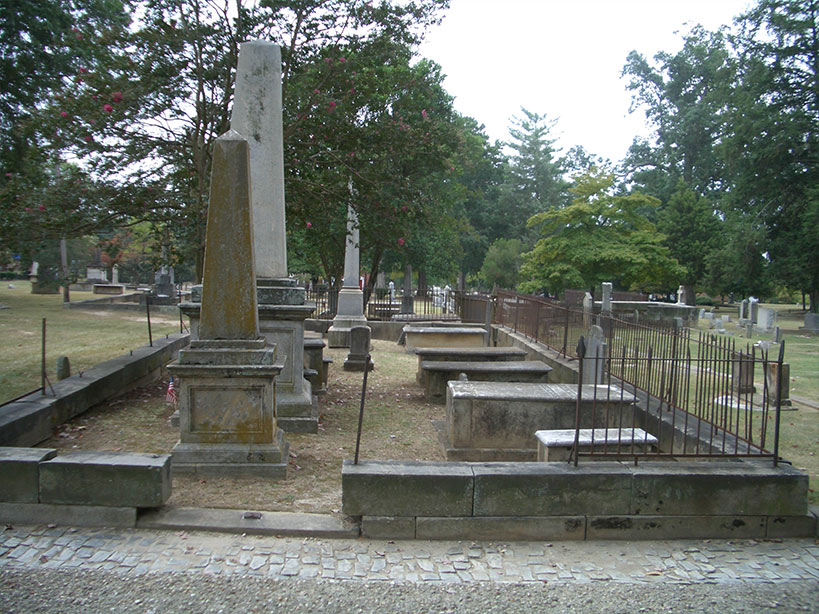 The monument for Rosebud Glennon, before and after,
and below includes the repaired Henry Albert Rayner box tomb. 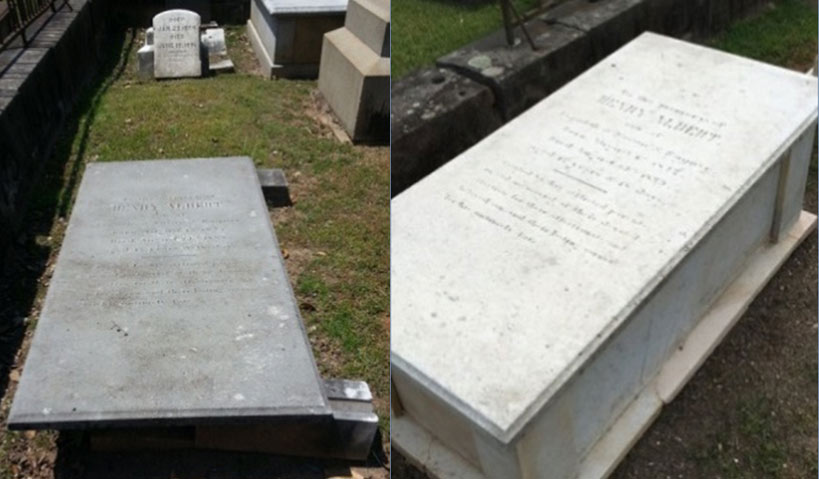 The obituary for Cato, an enslaved bookbinder, was cast as a bronze plaque through donations by the Richard Godwin family and RCCP in 2019. Cato, who died in 1811, worked at a printing press in Raleigh. He is buried in an unknown location in the enslaved section of City Cemetery. His obituary was discovered during researching City Cemetery by board member Betsy Shaw. RCCP held a ceremony in Cato’s honor in June 2019. 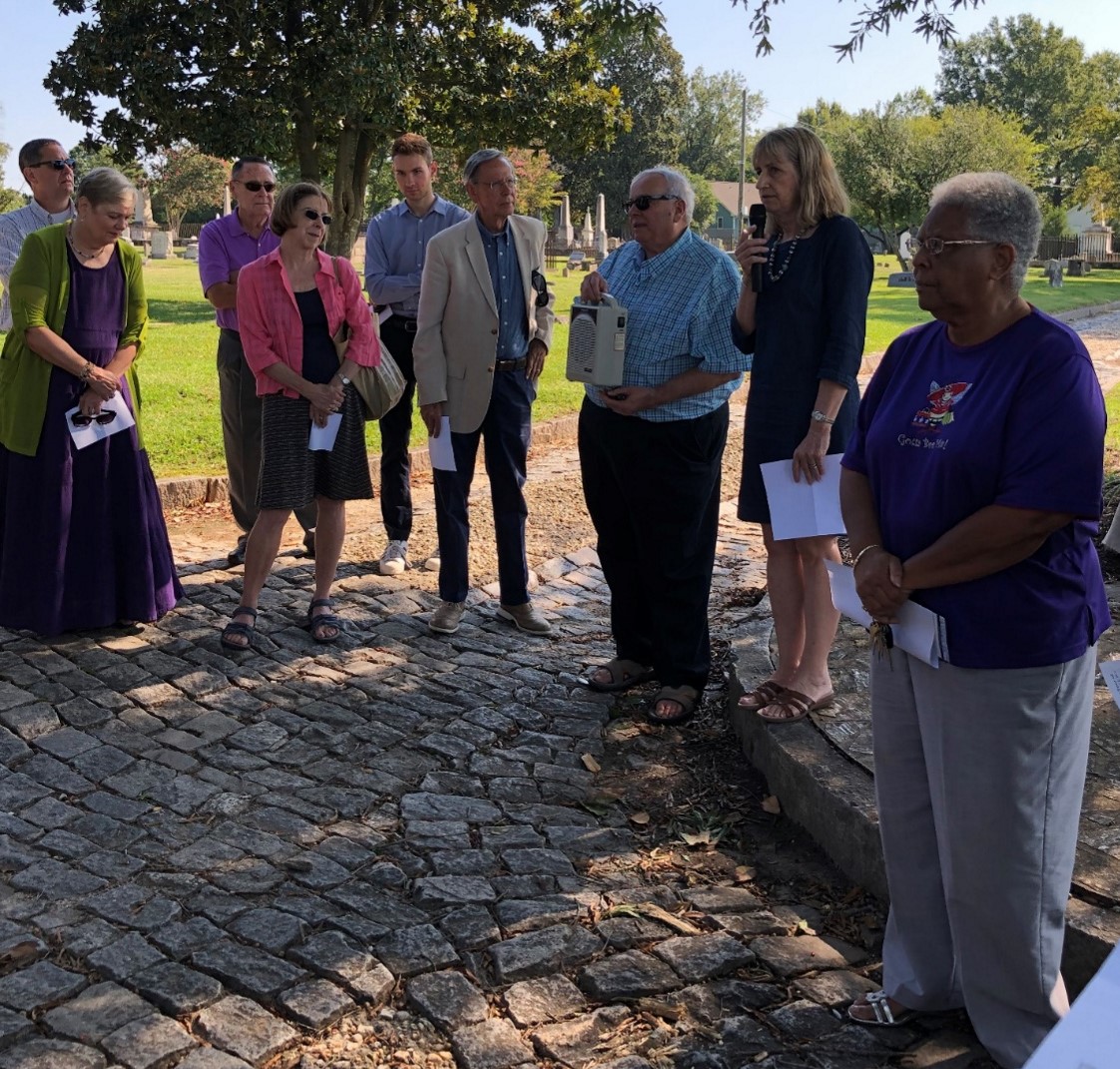 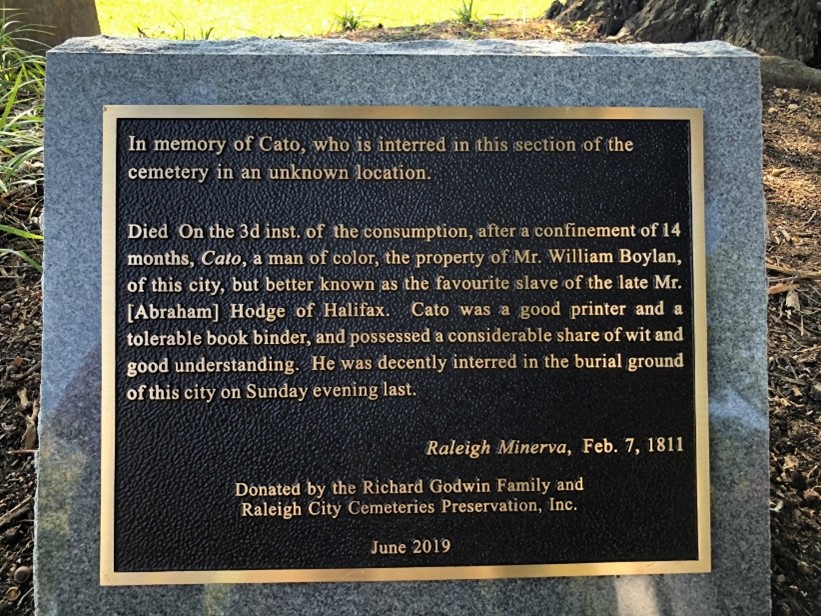 His career included serving as a collector chief clerk and cashier with IRS from 1885-1890. President Benjamin Harrison nominated Young to collector of customs for the Port of Wilmington, but the Senate adjourned without confirming his appointment. Two years later, Secretary of Treasury William Windom appointed him special inspector of customs. Young served Wake County and North Carolina as an organizer and leader. He served in the General Assembly in Wake County in 1894 and 1896. Young served on board of trustees for the Deaf, Dumb and Blind school (as it was known then) in 1897, making him the second African American to serve in that capacity. He also edited The Raleigh Gazette, an African American political journal.

During the Spanish-American War (1898), Young joined the volunteer U. S. Army, Third North Carolina Infantry, rising to the rank of Colonel. In 2016, RCCP funded the installation of a plaque at his graveside in Mt. Hope Cemetery to mark his military service. Many enlisted soldiers in his infantry are also buried at Mt. Hope Cemetery. 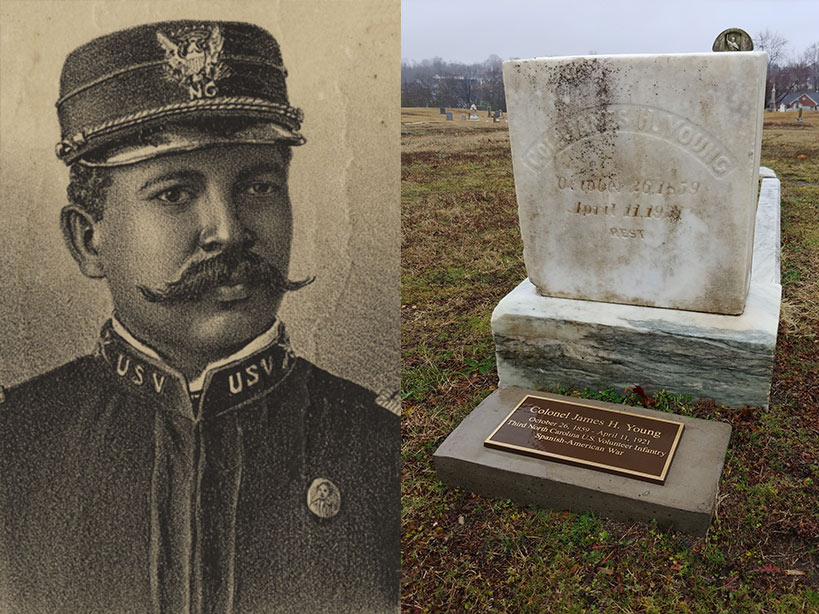