Slave cemetery fights for life. ‘I’m haunted by who the descendants are of these folks.

Posted on February 23, 2018 Categories: African American History, Opportunity to Give Comments are off for this post 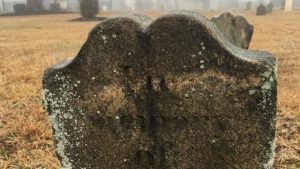 In 1811, a slave known only as Cato died of consumption in Raleigh, taking his rest in the corner of City Cemetery reserved for the black departed.

No one knows Cato’s age, but his reputation endures in an obituary printed in the Raleigh Minerva – a recognition few slaves received. In the death notice, Cato was described as the property of William Boylan, the newspaper’s publisher, who called him “a good printer and a tolerable book binder,” praising his “considerable wit and good understanding.”

But no other trace of Cato remains. The legend of his character outlived his gravestone – if he ever had one. Of the roughly 300 slaves and free blacks buried in City Cemetery, about 60 markers exist, many of them broken, illegible or lying flat on the grass.

Among them: Nancy Kennedy, “a faithful servant,” Harriet Bryan, “aged about 54,” and Columbus Thompson, whose marker points a finger to the sky and proclaims, “Happy is he whose hope is in the Lord.”

By the end of this year, the nonprofit Raleigh City Cemeteries Preservation hopes to restore a dozen more of these graves, adding to the city’s dwindling historic roll call.
Donations to the group have already rebuilt the crumbling monument to Jacob Johnson, whose son Andrew became the 17th U.S. president, and for the family of William Peace, namesake of the Raleigh university. Now its attention turns to those dead granted the least recognition, whose resting place grows increasingly empty.

“I’m haunted by who the descendants are of these folks,” said Jane Thurman, president of Raleigh City Cemeteries Preservation, motioning to the sparse collection of stones off East Hargett Street. “People don’t know this is here.”

Established in 1798, the cemetery ranks as the city’s oldest burial ground with iron fencing that once kept livestock from wandering onto the Capitol grounds. Laid out in four sections, the graveyard specified two squares for Raleigh residents, one for “strangers” and one for blacks – most of them slaves.

The slave section bears a monument placed by the city in 1991, but little else commemorates the dead buried there. Historians guess that what markers were originally placed were not durable enough to survive. At the time City Cemetery opened, few graveyards made any space for blacks. In recent decades, the grounds have endured vandalism, hurricanes and a 2011 tornado that toppled most of the large trees.

For more than 40 years, amateur historian Betsy Shaw led a tour on Labor Day, calling it her “crazy” hobby.

“My husband and I spent God knows how many Sundays laying on our stomachs in that cemetery,” said Shaw, now 85, “because if the sun is right you can read the stones. One of those stones was just laying there and it was really filthy, so I took it home and washed it. A policeman said if I did that again I would be arrested!”

Of all those interred, Shaw’s favorite grave belongs to Anna Julia Cooper, born a slave in 1858. By the time she died in 1964, she had graduated from Oberlin College in Ohio and returned to Raleigh to teach math, Latin and Greek, later taking her doctorate at the Sorbonne in Paris. In 2009, her face graced a postage stamp.

“I just read the stones,” Shaw said, “and look for their stories.”

As a historic preservationist, Dean Ruedrich has pieced together many of the markers off Hargett Street, and he called 12 a reasonable goal for 2018. One of the most prominent stands for Chaney Harris, who died in 1832 “at an advanced age.” The pieces once split down the middle are now joined, held together by a pair of metal braces that restore a weeping willow carving to the top.
Ruedrich notes that stones carved in Raleigh were granite, whitewashed to look like marble. About five years ago, he discovered one marked “For Sale” in red paint, its white exterior having worn away to show the stone cutter’s original markings.

There is, he said, no telling what hidden clues can be found with care and close study. Names and dates covered in lichens and moss. Records buried inside old Bibles. Maybe even the whereabouts of a good printer and tolerable book binder, his wit still sharp.

A Walking Tour: The African-American History of City Cemetery